Carnival in Vienna means jesters’ licences for all!

Shrill carnival costumes, colourful parades and eating “Krapfen” – The carnival season in Vienna is linked to many traditions.

On “Faschingsdienstag”, this season reaches its peak. 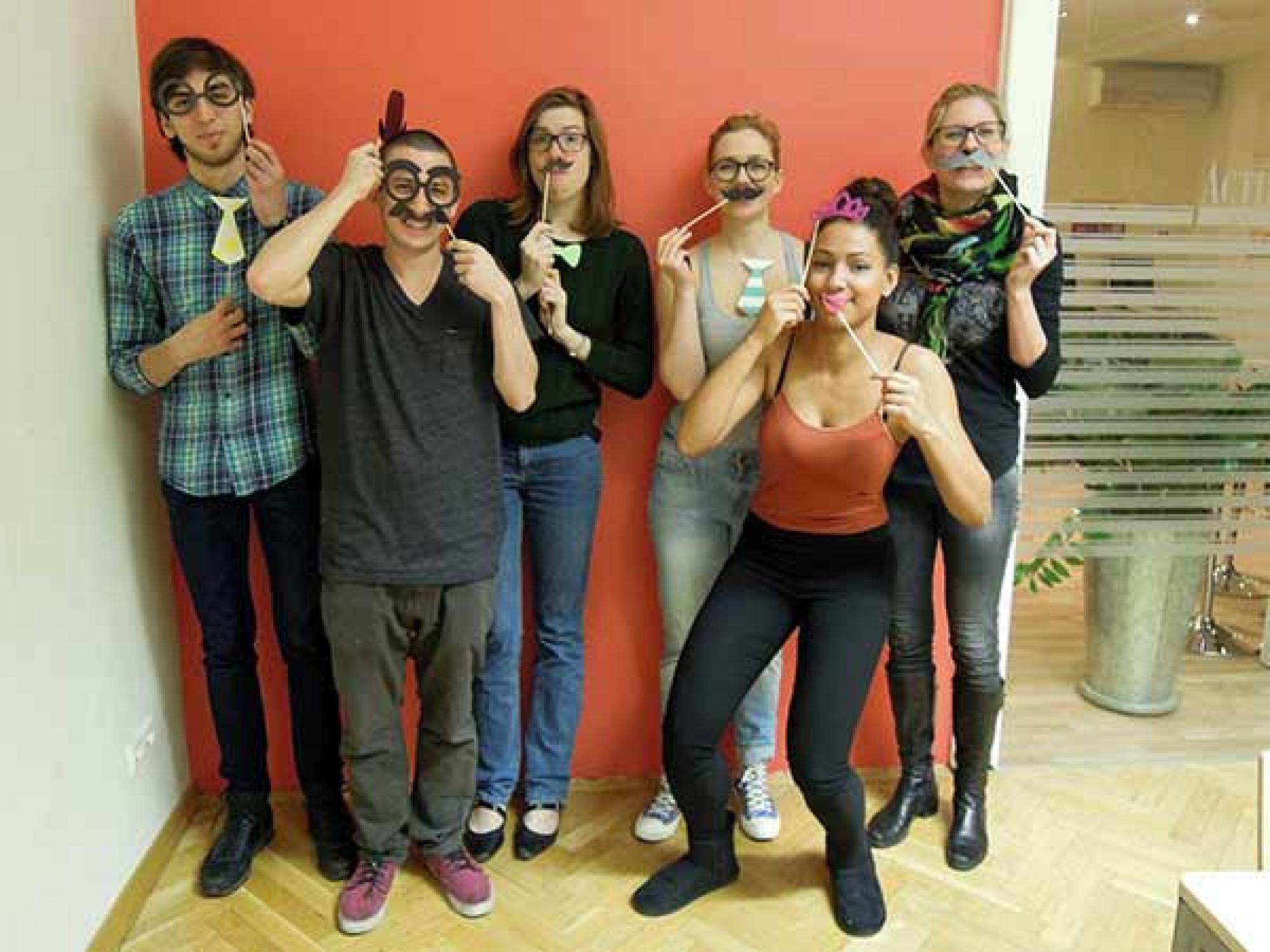 Carnival or “Fasching” is the best chance to get to know the crazy side of Austrian culture. Fasching is the time before the Christian season of Lent, which begins on Aschermittwoch (Ash Wednesday) and is a preparation for Easter Sunday. Until about 100 years ago, Fasching started on January 6th (Epiphany) while nowadays, the official start of Fasching in the German-speaking regions of Europe is on November 11, at 11:11 AM. The most active day in the Fasching season is Faschingsdienstag (Shrove Tuesday or Pancake Tuesday). This year it falls on February 28. At midnight in the night from Faschingsdienstag to Aschermittwoch, the “Fifth Season” finds its official end.

There are several names for the festival season in the German-speaking area. The most common are Fasching, Karneval and Fastnacht. Karneval is mostly used in the Rhine area while Fastnacht, Fasnacht, Fasnet or Fasenacht is celebrated mostly in the south-west of the German-speaking regions. Austria, Bavaria and the eastern parts of Germany call the season from November 11 until Aschermittwoch Fasching.

The Atlas zur deutschen Alltagssprache has made a survey, how people in German-speaking regions call the time before Aschermittwoch. This map shows the results: 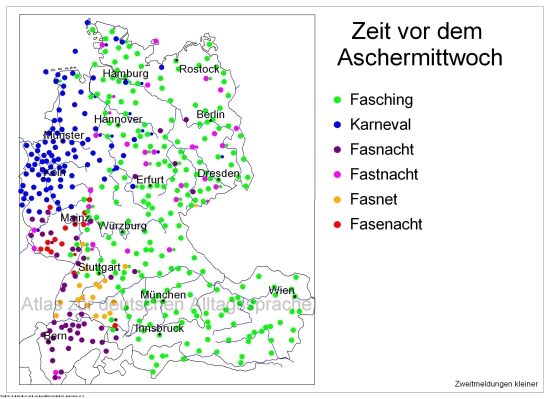 Where do the customs and traditions around carnival come from?

Originally, the famous Carnival/Shrove Tuesday was once considered a confessional day or a day of forty-hour prayer.  The day served as a spiritual preparation for Ash Wednesday and the following Lenten season. From there, many traditions and customs developed, which are still of importance today. Instead of forty-hour prayers, today we organise large parades and celebrate in fancy costumes. That is why the carnival season is also called “the fifth season” in many places. The tradition of wearing costumes goes back to the time of antique gods.  Back then, people used to wear especially festive clothes in order to honour the gods and thank them for their gifts. Today, the carnival season takes place from January 6, traditionally known as “the Twelfth Day”, and ends on Ash Wednesday. Therefore, on Shrove Tuesday Austrians celebrate with numerous carnival parades, wear funny costumes and try to fill their stomachs with some typical delicacies before the Lenten season starts the following day.

The Viennese carnival season offers many delicacies, but the most popular is the “Viennese Faschingskrapfen”. It is kind of a doughnut filled with apricot jam and sprinkled with powdered sugar. According to some stories, the carnival doughnut was an accidental invention of the Viennese court council cook Cäcilie Krapf.  It is said that while she was cooking, the dough for some bread rolls accidently fell into the hot lard. Every year, Austrians eat at least 100 million carnival doughnuts. There are no specific rules on how to eat a Faschingskrapfen, but beware of inhaling too deep while eating it. Otherwise, your face is full of icing sugar.

Of course, the customs and traditions also differ on a regional level and from state to state. While in Tyrol, it is common practice to throw glowing logs from a hill on carnival Sunday; in Styria, it is a long tradition to join the annual carnival race. The participants walk from house to house up to the highest farm in town in order to drive away the winter. Especially the “Ausseer Fasching” in the “Salzkammergut” is well known for its special traditions in Austria and abroad. So called “Trommelweiber” are running through some small villages and are drumming the melody of the “Ausseer Faschingsmarsch”. In the capital city of Austria, the rural customs are not as common, mostly because of the famous Viennese ball season which also starts in January. Whoever wishes to join a carnival parade however, needs to go to the inner city or to the districts of “Währing” and “Döbling”. Still, if you want to go out in the evening and show off your best costume, you will surely find the perfect location in Vienna. 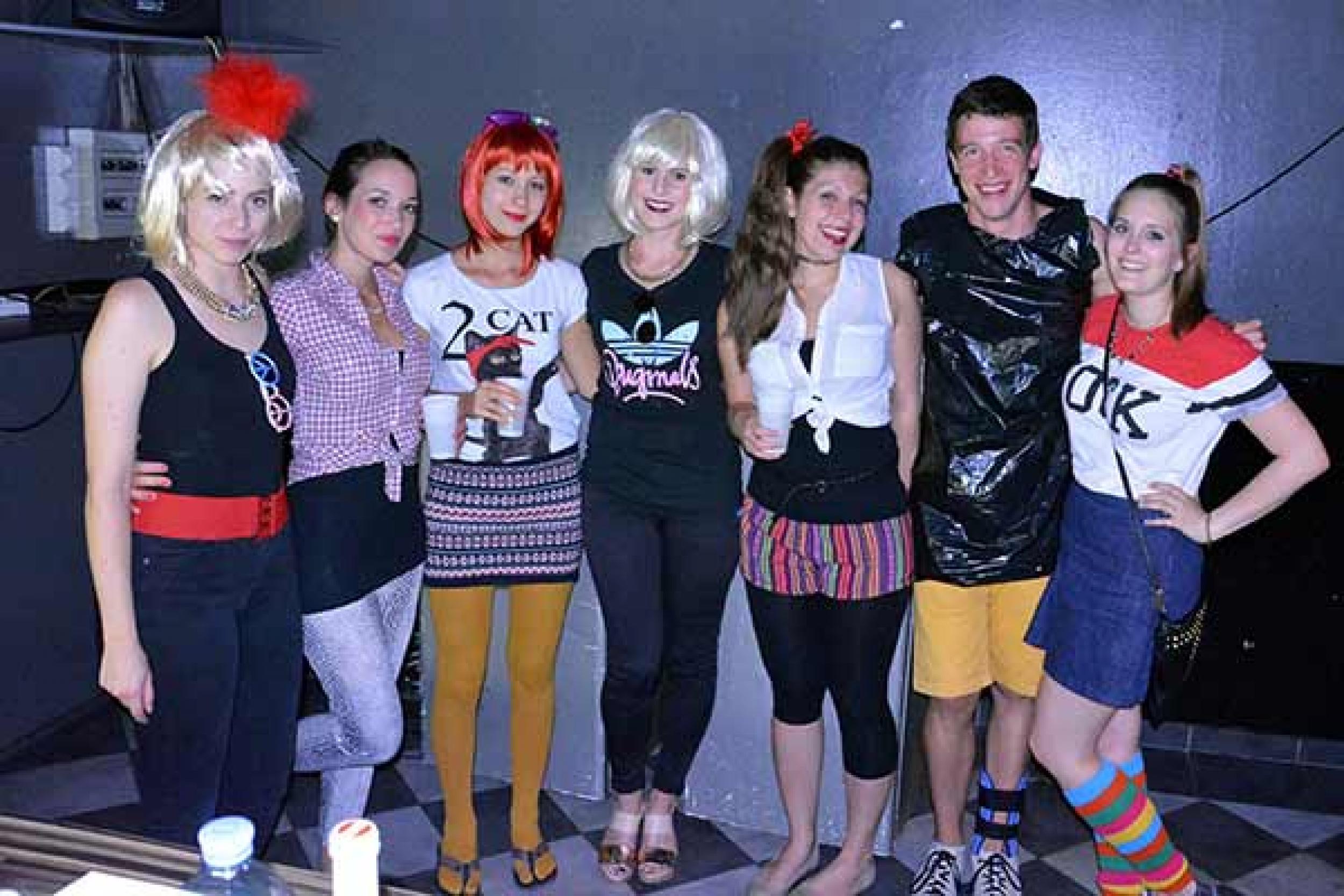 Even at the ActiLingua Academy today’s motto is: jester’s licenses for all. Our students present themselves in fun costumes and enjoy a nice evening together.

Do you also want to spend the carnival season in Austria and improve your German skills?

Find all our courses as well as our cultural and leisure programme here.